Last Monday the facebook posts were flying…It’s snowing in Tucson! OMG! It even made national news! For those who live in snow country, I’m sure you’re like, ‘So what’! But, for us in the lower elevations of the Southern Arizona desert, it really is a special event! The Tucson area is lucky to get snow once or twice a year. I’ve only seen it snow in Todd’s backyard once in the 9 years we have lived here. So, late Monday afternoon when I looked out the sliding doors and saw these huge white flakes of snow gently drifting to the ground, I immediately shut off my computer, built a fire in the fireplace, opened a bottle of wine and grabbed my camera!  Unfortunately, the magical moment couldn’t be captured on camera, as the snow wasn’t sticking and every picture I took just looked like a wet and gloomy day in the desert. And then, just as suddenly as it started, the snow turned back into rain….I went back inside, and back to work.

About 20 minutes later, Todd got home, and seemingly, with his arrival, the snow returned! This time with greater intensity and purpose! Of course, Todd had to go out and brave the ‘blizzard’!

We expected it to stop at any moment, but when it didn’t we were giddy with excitement! We felt like kid’s on Christmas morning!…Like parents witnessing their child’s first step!….Like we had won the lottery!…Ok, ok, I may be getting carried away, but it was exciting when we witnessed the yard gradually growing a little whiter, and  a little whiter! 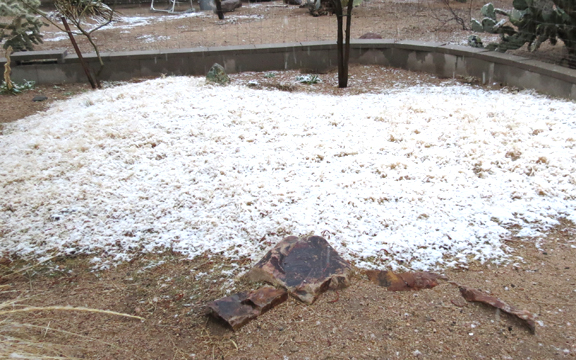 The snow fell for, maybe, 45 minutes. It never really turned the landscape into an actual winter wonderland. We never had enough to go out, stomp around and make a snowman. But  it was still lots of fun!
Although, I can’t speak for other folks that live around here, especially the ‘snow birds’ that come here to escape the winter weather. I have a feeling that they were not quite so excited about this snow event as we were.

But, I just happened to catch one bird out there that seemed to like it!

Snow, there you go!

One thought on “Snow What?”