Once upon a time, there lived an old* woman who suffered a broken heart after her husband died.  Although she had family and friends who loved her dearly, she lived alone and wished for a little companion to keep her company. One day, the old* woman went with her daughter to visit their friends who lived on a ranch in the country. There, the old* woman met a mischievous little puppy that she immediately took a liking to. She was told the pup was a trouble maker…harassing the horses, pestering the neighbors, chasing cars and perhaps, needed a new home. So, the old* woman took the little dog home to live with her. To keep the puppy safe and out of trouble and fulfill her wish for a companion to keep her company. She called her new little friend Bizbee.

Because the old* woman loved Bizbee so very much, she decided to find her a friend. So, she brought home another puppy she named Benson. The old* woman loved both of her dogs more than anything…Her very life revolved around them!  Over the next several years, Benson grew into a giant 100 lb. dog who commanded all of the attention from the old* woman and anyone who came to visit. But, little Bizbee loved her Benson and didn’t mind that she was not the center of attention.

Because the old* woman loved her dogs so much, she became obsessed that something might happen to them and went to great lengths to keep them safe! Both dogs were never allowed to leave the house for fear they would run away. The old* woman’s daughter pleaded with her mother to let the dogs, at least, come visit her house. But the old* woman was too frightened because her daughter and son-in-law lived where there was no fence, lots of sharp cactus and dangerous wild animals roaming about! But her dogs were happy with their lives. They were well loved and well taken care of. They loved the old* woman and the old* woman was happy.

One day, the old* woman had a stroke and became very ill. Her family was  overwhelmed with taking care of her so, her precious dogs were sent to a ‘safe’ foster home until she was well enough to care for them once again. But, the old* woman did not get any better and she died…Most likely, a broken heart contributed to her death, as she was afraid she would never see her beloved Benson and Bizbee again….

And this is where the story begins…

My mom passed away on December 5th. She had a stroke the first of October and started to recover, but had another stroke and complications that she could not recover from. The day after she died, I called the foster home caring for Benson and Bizbee to see if they would adopt both dogs. My mother was adamant about keeping them together. Benson, a 100 lb. labradoodle was just too much for our little pack, so Todd and I could not take them.The foster mother, our local groomer, was happy to adopt Benson, but Bizbee?…Well, she was a ‘problem’ dog.

Todd and I agreed that we would bring Biz home and see if there was anyway she might be able to live with us….at least until we could find her a suitable home. We were worried that having led such a sheltered life, we would encounter all of the horror’s my mother had imagined…Chasing rabbits for miles and getting lost…fighting with a javelina…getting impailed on a cholla, getting bitten by a rattlesnake, running away at first chance…With Bizbee, you just never knew. She loved to pounce on birds and chase lizard’s in my mom’s yard, much to my mother’s horror! Bizbee could be a handful!

I brought Bizbee to our home on Dec. 9th. 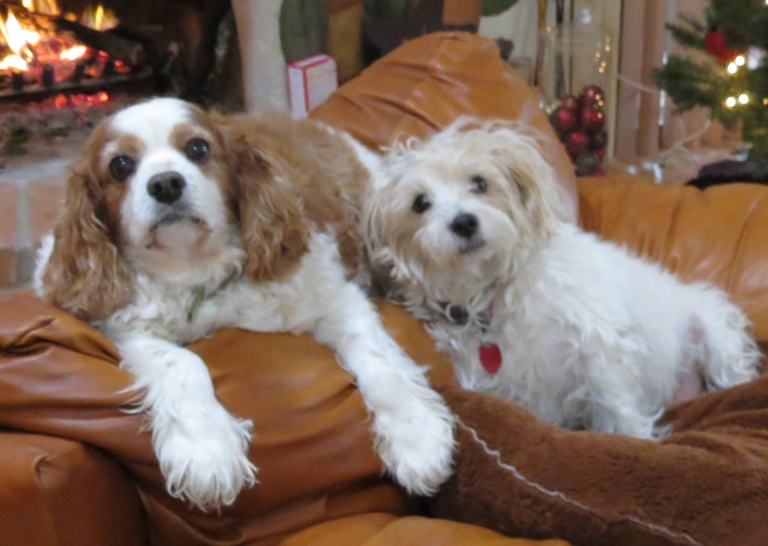 She was a little lost and forlorn. My heart ached for her as she found the blanket that covered my mom when she passed away, and laid on it the first day she was here. But then she found Baily. She had known Baily and our other dogs for years since we had taken them to my Mom’s house many times! I’m sure this was a huge factor in adjusting to her new environment.

Since we were a little nervous about letting her outside, we got a tether so we could hook her up on the porch without worrying about her bolting. But poor Bizbee was not very happy with this situation! 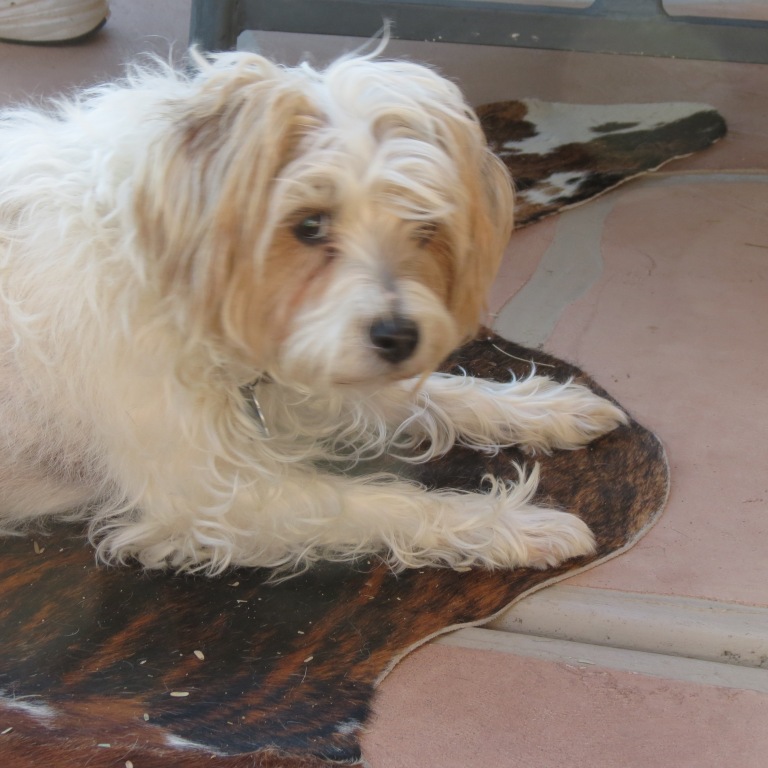 One afternoon, shortly after Bizbee came to live with us,Todd left that sliding door open, forgetting about Bizbee. Upon entering the house and realizing Bizbee was no longer in the house we panicked! I  would be devastated if we lost her! All the fears my mom had would be validated!

But, as soon as we prepared to go walk the neighborhood in search of her, little Bizbee calmly walked into the house from Todd’s Backyard, looking at us like “What’s the big deal?”.

Since then, the tether has been put away and Bizbee is free to have new and fun adventures in Todd’s Backyard…. 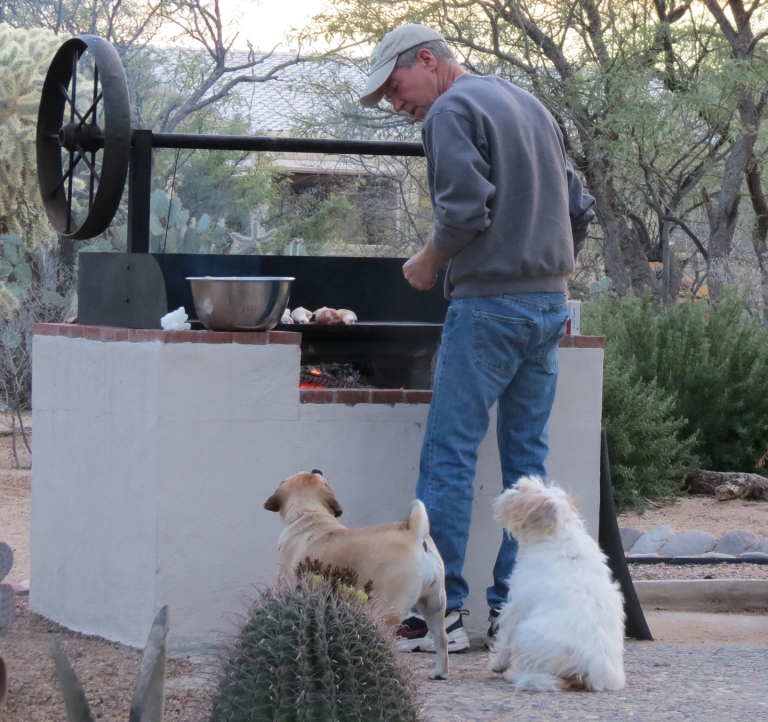 Helping Todd grill with Daizy is one of the best! 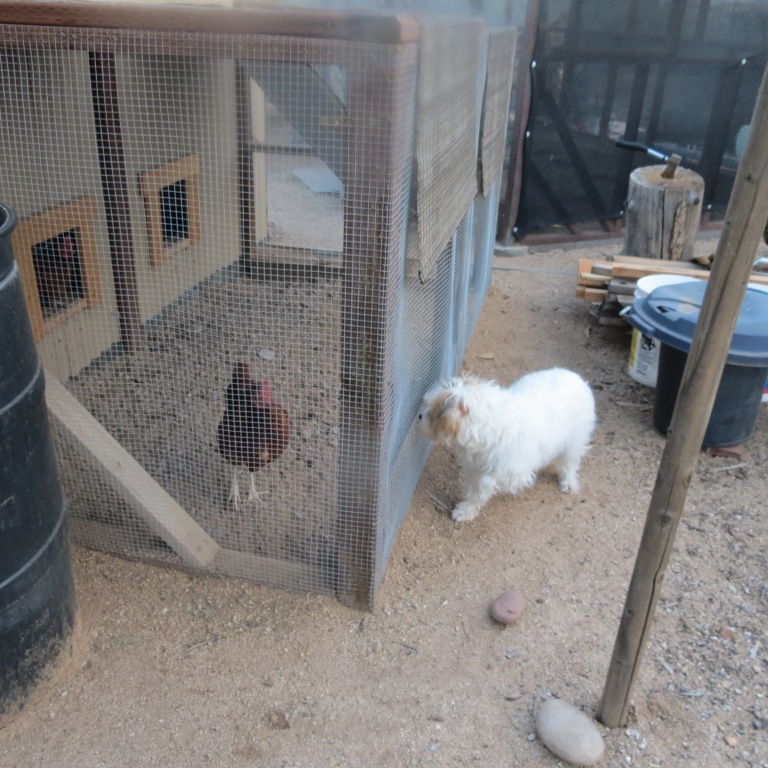 However, it would probably be much more fun to actually help him get the chicken to put on the grill! 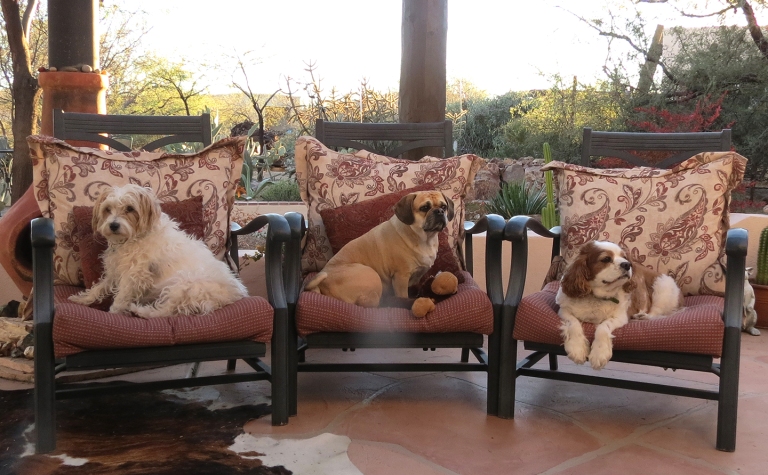 Bizbee has taken her seat on the porch…She does not chase the rabbits, she does not eat lizards (yet). Her only mishap has been an infected cactus thorn in her paw (Sorry Mom!) 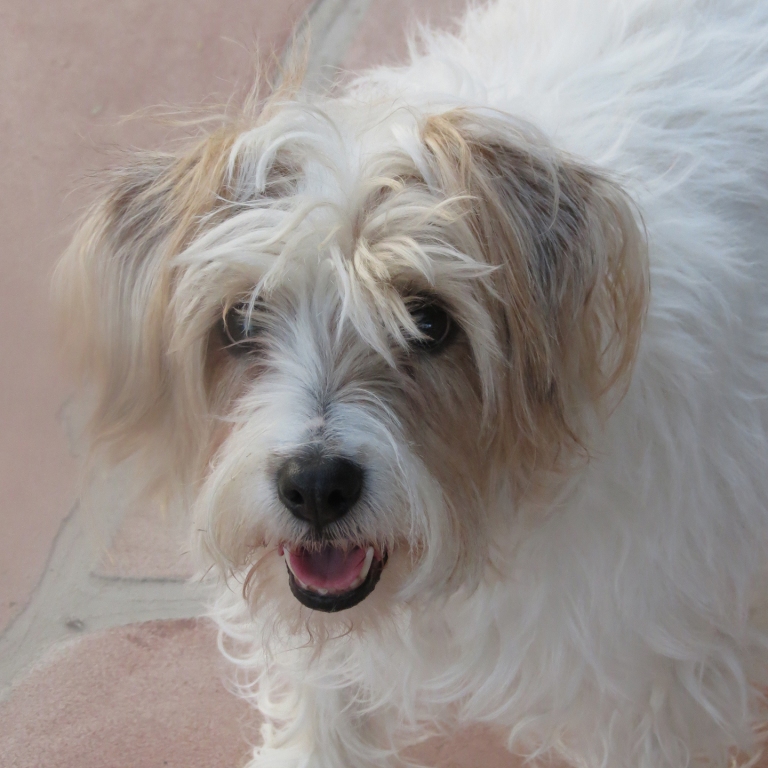 Bizbee has found a new life with a family that loves her, and is also trying to find a new life after the loss of someone they all loved.

She could make new friends.

She could investigate the yard as she pleased…for the most part.

And she could mend a broken heart…for the second time!

And as for the *old woman’s daughter…..She apologizes to her mother for calling her *old ( Therefore the *) and hopes that her mom is not rolling over in her urn for posting this blog-  But the daughter is sure that that her mother is happy in heaven knowing that her beloved Bizbee is still well loved and taken care of and will live happily ever after. 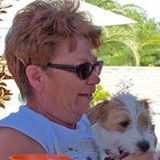 A little part of you is still with us through Bizbee….Thank you!

2 thoughts on “The Little Dog that Could”