Kinda like sands through the hour glass, (wink, wink 😉 , a little tribute to my mom’s favorite soap opera),  the days of our lives keep on sifting and shifting.  2015 was a little rocky. But, I guess somehow getting rough and tumbled now and then, can really ‘polish’ your perspective on life!! 2016 promises to be the beginning of a dazzling new year. And one of my many New Year’s resolutions is to start blogging again on a regular basis! So, it’s time to rock ‘n’ roll…

In the Sonaran Desert, rocks are, as you might suspect, plentiful! River rocks are a main staple in a lot of the landscaping in these parts. You will see many yards with dry rock river beds running through their property. In our case, Todd built this one that runs right off of our back porch which lines a natural wash. So, when it rains, it turns into a lovely little babbling brook! With El Nino visiting this year, it’s been running quite a bit!

Todd has used a lot of river rock in his landscaping, but, we have been lucky to embellish the yard with the natural rock we find right in our own yard!   We just happen to live a stone’s throw from the base of a large copper mine! So we’ve created a few little rock gardens to show off and display the rich mineral colors that are the trademark of the South West…

Azurite, malachite, chalocite, antite, chalcopyrite, this-ite and that-ite…We totally dig living in the ‘ite’deal location for rock fans like us!! Several years ago, the town of Sahuarita redid the main street at the end of our block,  which runs close to the mine. They dug up tons rock filled with glistening crystals and vibrant colors, leaving the piles on the side of the road! So, we took our wheelbarrow and a pick and traveled down the street to do a little ‘mining’ ourselves….

Not only did we find some lovely colors, we were most happy to find some gorgeously quartz laced rock… 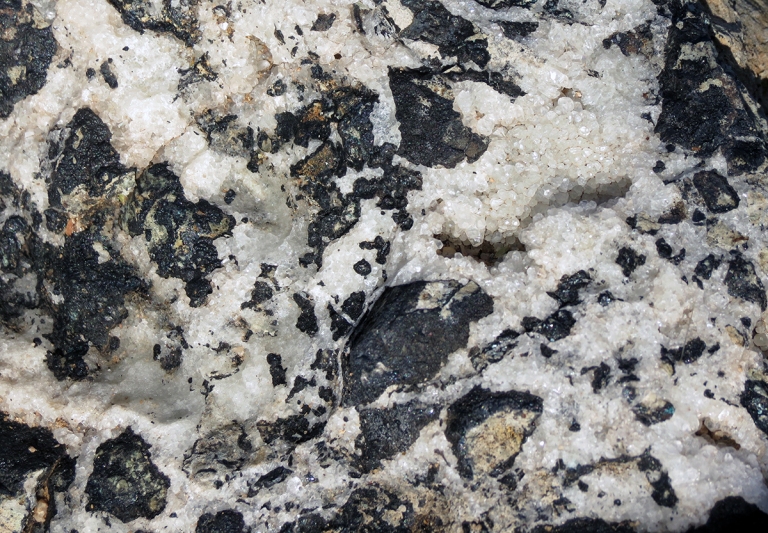 Alas, we found no gold, silver or copper 😉 But the crystals were a nice addition to Todd’s Backyard landscape!

My interest in rocks actually goes way back! Back to the prehistoric era that was my childhood! I attribute my appreciation for rocks, to my mom. When I was 4 years old, she took me rock hunting on the shores of Flathead lake, where she grew up. It was there and then that I discovered some varieties of rocks that tickled my imagination….Like flint (the material that the indians used to make their arrowheads). Petrified wood (which looked just like wood but it was a rock!)  And best of all, agates! These beautiful rocks that are transparent  and glow with colors when you hold them up to the light! All of these rocks were special, magical…they were treasures that could be found right on the ground!  By age 10, my entire room was filled with rocks! Rocks that I had either found, or bought from rock shops on our many family vacations. I learned all the names and knew all the scientific facts of each specimen- My dream was to become a geologist! But years later, that bubble burst  when I found out that the mastery of math was involved in such scientific endeavors.  ;p

I never stopped loving rocks. Inevitably, my eyes always go to the ground when I’m out in places where the prospects for finding a rocky treasure might be good!  Once a rock hound, always a rock hound! Years ago I passed on the best of my childhood rock collection to my nephew when he was younger. However, I held onto and still have, many of the rocks from my childhood. Todd and I have  given them a special home in Todd’s  Backyard….

There they sit, around the base of our chimenea mixed with other rocks that Todd and I have collected in the later years of our lives together. I don’t remember the names of many of them, but I remember many of the stories behind them….

Pictured above was one of the very first rocks I ever found, back on the shores of Flathead lake. Mom called it flint, but I believe most rock experts call it jasper. I always imagined the indians chipping away at it to make their arrow heads! We also found many arrow heads on those same shores!

Now displayed where Todd and I can enjoy them everyday, these rocks create their own kind of magic and artistic inspiration, especially when viewed in a different perspective…

Close up, they can be appreciated for the exquisite artwork, only God can create!

Although I have aged and my mother is gone, these treasured rocks will remain ageless and will live on through the ages, holding within them all of the dreams once held by the little girl I once was.  And holding all of the memories of the woman that has found  some of her greatest treasures in Todd’s Backyard!

I’ve taken some of these photo images and created products that are available on Todd’s Backyard Zazzle Shop:

One thought on “Rocks of Ages”