It IS that time of year….a frantic buzz of excitement- the chirps , squawks and squeaks- the birds and the bees are stirring!  Spring mating time is noisy! One of the more raucous merry makers, are the quail. Their distinct “cacaaawww…cacaaaaaaawwwww!” is heard frequently. They have a funny little ritual of climbing trees to call out their potential tweet-hearts! Let’s say, they get high on love 😉

Late afternoon is when they particularly like to ‘get high’. It was at that time, last week, when we witnessed  a would be wooer going wacky!

Todd had installed an ironwood quail carving on the branch of one of our mesquite trees a while ago. I never noticed that it had ever drawn any attention from the local bird population. That is, until a lovelorn quail discovered it and was apparently enraptured.

He climbed to the limb above, that had been conveniently cut into the perfect perch. There, he would try to get his wooden maiden to notice him….When she ‘wooden’t’, he jumped down and climbed back up again….and again….and again…putting his male to the quail…to no avail.

The poor guy was so distraught that Todd had to take down the tree trapped temptress.  I had to set this sad love story to little music…..

And with that, my friends, we raise our glasses to this lonely quail’s attempt at romance- certainly a great ‘CaCaaaaaws’!

Todd’s Backyard is filled with an assortment of furry little creatures….Varmints, if you will. In fact, we seem to have created a varmint paradise. Supplying a plentiful bounty for our birds, of course invites these little bastards. But, they keep the hawks, snakes, bobcats and coyotes fat and happy around here! You could call it Todd’s  Backyard Wildlife Diner!

Now, ‘Diner’ really fits since we got our new little Bird Photo Booth (www.birdphotobooth.com)- a feeder that is attached to a motion activated camera! We decided to introduce the contraption to the ground dwellers, as they might provide some entertainment before the jaws of nature snap them up.

The first varmint that decided to check it out was our resident rock squirrel, as we so dubbed him Rocky. Not totally original, but fitting….

He figured out quite quickly, this was pretty cool… 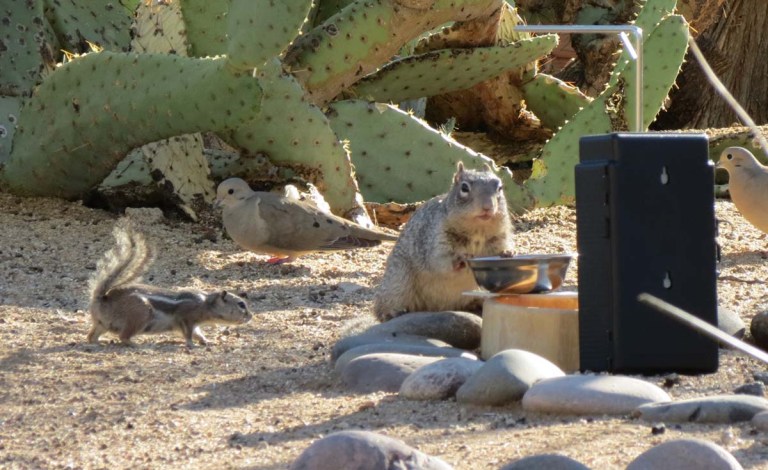 As did a few others.

And that, my friends is Rocky!

I think that I’ve mentioned on several occasions how bad a javelina smells? Imagine, if you will,  the perfect combination of skunk and manure, with perhaps a touch of rotten meat…ok?

Last Thursday morning, around 10 am, I let the dogs out to do their business.We were greeted with that lovely stench coming from a ragtag bunch (about 12 javelinas) that had overtaken the yard! So we made a U-turn and headed back into the house! After watching them for a few moments, I realized that they were not moving on, so I thought I had better go out and investigate whatever was keeping them occupied….

It appeared they had breached Todd’s last remaining plant barricade, and were having one hell of a party! I tried to shoo them off, but was quickly aware that I was surrounded, so thought better of pissing them off, and left them to their javennanigans…

Their plundering rampage kept them busy for several hours until they had full tummies and worn themselves out. But instead of moving on, they made themselves at home. Todd’s backyard was now a javelina jotel, littered with glutenous pigs! All twelve had picked out a comfy spot and crashed…

Pulllease!…Now how can you be mad at that! Awwwww!

They were still in the midst of their little siesta when Todd got home from work at 4 pm ( they had been here all day!)…I warned them that they had better be gone before Todd got home and found out what they did!!! There was gonna be hell to pay!

But would they go?….Hell no! 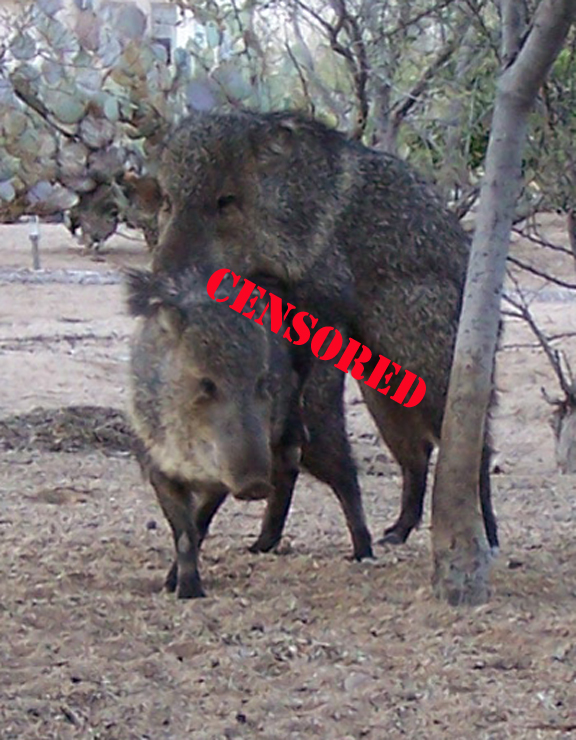 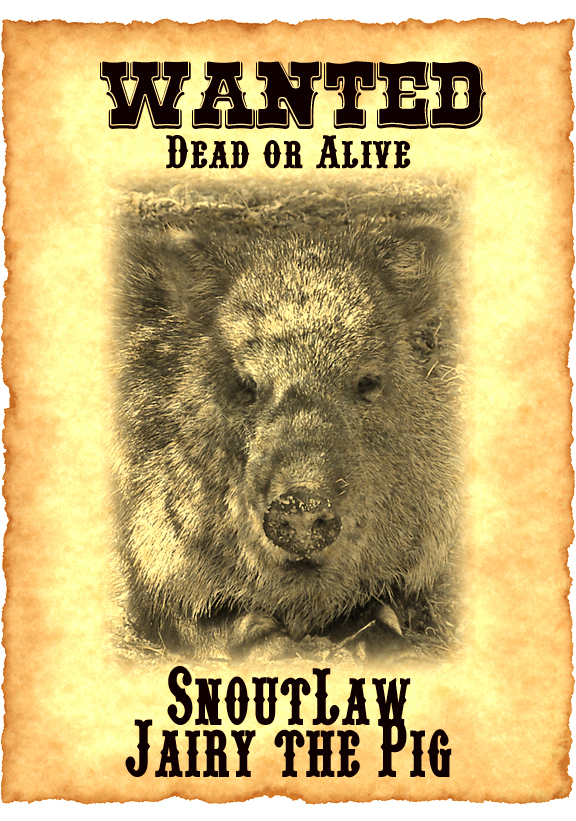 It’s not often you find a dog who loves oranges! Our old dog Molly used to love them. We thought she might be kind of weird. Well…maybe not?

Tonight, we were sitting out on the porch and I plucked an orange off of the tree to sample with my sangria. Cooper took his spot in the chair next to me and immediately started giving me “Cooper Eye”….the look he gives you when he wants something really, really bad. If he throws you that look,  and doesn’t get what he want’s? Look out,  he starts his Cooper tantrum. So of course I obliged!

Oh yeah….that did me right!

Please Mum….Cawn I have some moh?

As we relaxed on the porch last Sunday, a friendly bull snake decided to come hang out with us. He likes to come up and cool off under our outdoor beer fridge. We discovered him there last fall. Todd  had spotted his little tongue flicking from under the fridge when he went to grab a beer. We thought at first, it might have been a rattler, but after Todd stood on the counter and pulled the refrigerator out from the wall, we concluded that it was not.

Mr. Snake comes to  his ‘cool’ hideout on a regular basis, but he’s a little shy about approaching when we’re sitting on the porch.

Sunday afternoon, we first spotted the sneaky snake making his approach from under the mesquite tree on the side of the porch. 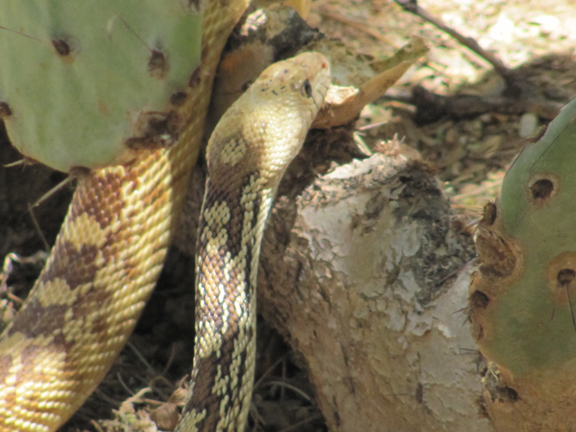 When he saw us watching, he got a little shy… 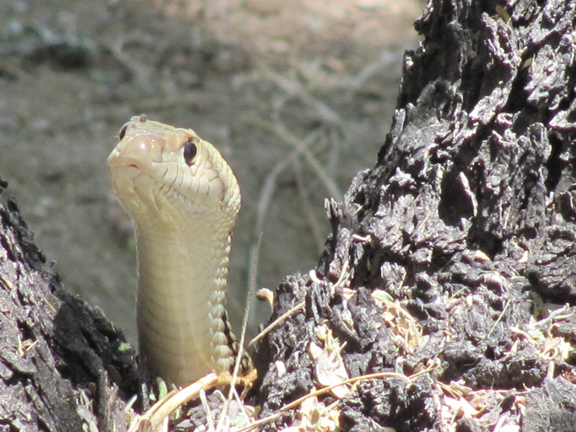 So he finds an inconspicuous spot to observe and wait for the perfect timing to make his approach.

The minute we went inside the house, here he comes. Straight to his favorite spot. After he made himself comfortable under the outdoor fridge,  we resumed our outdoor- porch-pre-dinner-Sunday afternoon- social with friends and family. Everyone was a little hesitant though, to get their refreshments out of the fridge…

‘Cause Mr. Snake wanted to be the  bartender!

Wow…what did we drink last night?

We’ve witnessed a lot of amazing things in Todd’s Backyard, but this had to one of the most creepy/crazy things we had ever seen…. 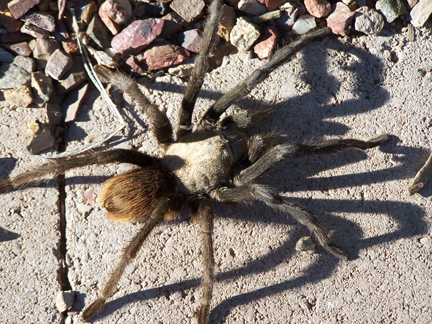 I think this guy a male tarantula. They’re not mature until they are 10 years old! Then they leave their burrows.This on was wandering the desert looking for love… and he found it! (If that’s what you could call it!)

( Notice the fangs on the one on the right!)

Oh yes, it was love at first bite? As Mr. Tarantula wandered past the female’s burrow, she literally leapt out and pounced on him! A ‘struggle’ ensued for about 10 minutes, then the female went back in her hole and the male wandered up to the porch. Now, I’m told that the female bites the male, and the male dies. I guess at least the little guys have their 10 years of life prior….what a way to go out! The female apparently lives for up to 20 years! 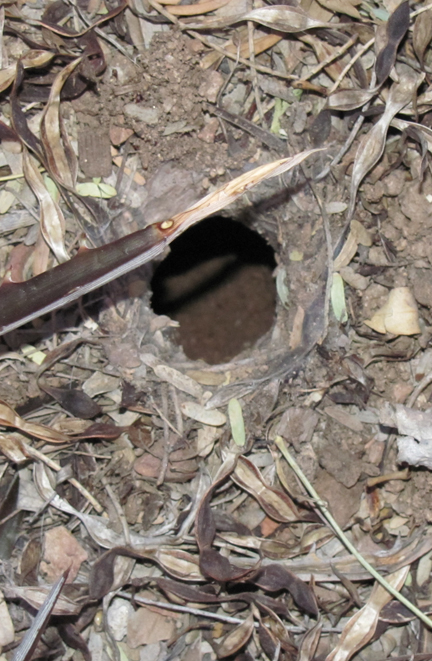 Come out! Come out, where ever you are!…We’ve recently noticed this new burrow, so perhaps we will get to see our furry little friends again! 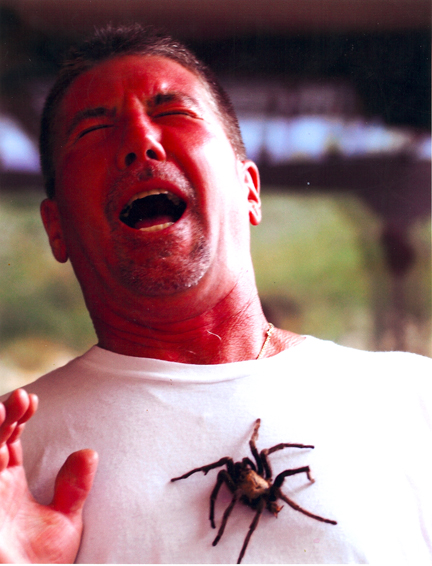